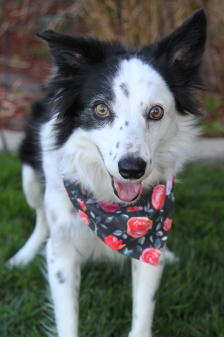 The Queen B 👑 (Formerly Princess Blitz)

My sweet Blitz. ❤ I can’t really complain. The vets gave her 3 months to live in August 2019. It’s now just shy of 1 year and 6 months later. It always sucks, no matter what. It never goes away either. On the bright side, this was the best case that we could’ve asked for, given her diagnosis/death sentence. (Heart & Kidney Failure – both have conflicting treatments.) In reality, I’m surprised she lived so well for this long. But since this is Blitz, I’m also not surprised at all. Blitz was really good at exceeding peoples’ low expectations. I should rephrase that. She didn’t just exceed them, she would completely *obliterate* them.

She overcame all of it. She made lots of doggie friends. She got excited to try new things and go new places. She loved to learn new things and even finished a Trick Dog Champion title. She learned to like doing air tricks and being caught. She became an amazing freestyle dog. She would catch the hardest tricks so well! She Q’d for many finals events, despite many writing her off in the beginning. Considering all of her amazing accomplishments, I think her favorite obstacle to overcome was food (that wasn’t for her!) on the counter. When she could, she’d totally try to steal food…but only the good stuff!! One time, she found out ramen wasn’t really “steal-able” when you knock it upside down and just ruined it for both of us. She was a master at getting take out boxes open, especially if it was chicken. It’s not like I wasn’t going to share with her. I think she just liked to be a little naughty and impatient sometimes.

Overcoming tough obstacles seemed to be a theme throughout her life. Whether it was fear, doubt, anxiety, new skills, or some health issue, somehow, she would just conquer whatever was in her way. She got through it all, even if it was it was hard. At the very end, when her health was taking her away, she still kept going – trying to snuggle up for some lovin’ just one more time. She wanted every last little bit she could get. All things considered, I believe she is my most accomplished dog. However, her successes were only part of her life. She taught me a lot more. I can’t even begin. Blitz taught me more about dogs than any other dog. She inspired others, too. Sometimes it was tough, but I’d do it a million times over. All of my dogs have taught me things. I think Blitz was the key to everything for me. Everything I’ve learned from Blitz helped my other dogs in so many ways.

When she got diagnosed, I told her she couldn’t die. We had just lost Sketch one week before and I couldn’t lose her too. Apparently, she listened to what I said. She started eating again. We played a ton and did all her favorite things. We went hiking & swimming (and she’d try to deep dive for the disc any time it went under, despite me cringing). She played with her favorite toys – frisbee and that ball that was just a little too big for her to pick up easily. She loved to try to pick it up anyway & she got pretty good at picking it up. She went to the chiropractor & got massages. She learned new tricks. She got lots of yummy treats & food, especially her favorite, steak…but not just regular steak. She wanted medium-rare filet mignon with SEASONING!! (I’m with ya, girl!) She got to love the best things in life and got to have all of it, all the way to the end. Her favorite thing of all was getting neck rubs and scratches.

I wish they lived forever. We got really lucky with her in so many ways. I just can’t help but think she deserved to live longer after overcoming all of those demons in her head. She worked so hard and I wish she could’ve gotten a few more years of her free self. Even if they all lived to 20 or more, I’d still want them to live longer. I’m glad I got so much time with her, especially on her final days. I hope to see you again one day, BB. ❤ Give Sketchy a kiss and try not to herd the Yorkies too much. Tell Lucky I said hi too. Thank you for everything. You’re the best. 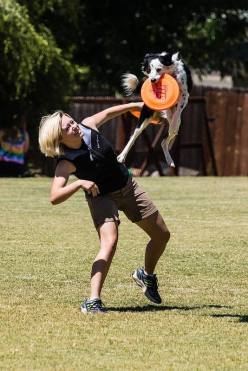 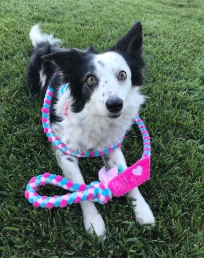 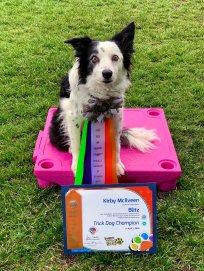