If you or someone you know often plays ball with their dog(s), you should probably keep reading. I had no idea a ball could pose a choking danger. 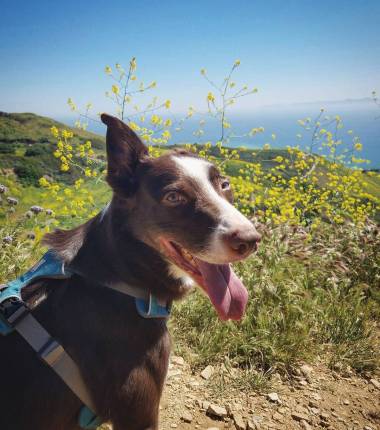 This is Torch. He’s 8 years old at the time of writing of this. He’s also extremely lucky to have made it to 8, since just a year ago, he came moments from death after choking on a ball. This was, far and away, the most terrifying thing I’ve ever experienced.

THE STORY
Torch was chasing a ball February 16, 2017, as he and my other dogs have done countless times over the last decade After he caught it, he immediately laid down and pawed at his face. I ran out to him, saw his mouth open, and didn’t see the ball. I looked in his mouth and it was lodged deep down in his throat and he was choking on it.

My long time friend from disc dog events, Jeff, was there with his Australian Shepherd, Slayte, playing disc on the other half of the field and ran over after I screamed. I tried to do some attempt of the Heimlich maneuver, by lifting him by his stomach and thrusting. That didn’t work. (I learned after the fact that didn’t do it right. But even now, after learning how to do it correctly, I’m not convinced that I could’ve gotten the ball out with the Heimlich alone.) The ball was totally suctioned in. I could feel it deep in the ribbed part of his throat. It was totally suctioned down in there. I still vividly remember that awful sound of Torch chomping and squishing the ball to try to get it to go down his throat.

We were running out of time and the makeshift Heimlich wasn’t getting us anywhere. So I stuck my hand down in his mouth to try to get it. Jeff stood behind him and gripped the bottom of his throat to prevent it from going down further. Despite trying to get my hands around it, there was no way to grab it. Jeff was able to push it up a bit, but it slipped back down. The choices were either to push it down and see if he could breathe (And if he even could breathe, he’d need it surgically removed. But at least it’d give us some time.) or to pull the stupid thing out. I’m not an expert in how much a dog can swallow whole and I wasn’t going to gamble on this. We needed to pull it out.

Torch was really good about being still so we could help, but he couldn’t help but keep chomping. There came a point where the pain was unbearable. I didn’t know you could feel so much pain and numbness at the same time. I had to take it out for a couple seconds. It was at that moment that I realized we might not be getting this thing out and Torch was probably going to die in the next few minutes. I wondered if we were already too late. His tongue was purple and eyes were rolling in the back of his head. Jeff was wrapped around T and said his body was completely limp. He wrapped his hand around T’s neck and pushed up on his throat once again while I stuck my hand back down. I told him Jeff needed to squeeze as hard as he could because a broken neck or throat wouldn’t really matter if he’s dead.

This happened to be a Chuck-It Whistler ball, which is the same size as a tennis ball and has a hole on each side (but it doesn’t go all the way through, so didn’t help much with the whole suffocation issue). I don’t want to think about if there had not been a hole. Torch’s clamping and chomping had turned the ball around just enough, and by some miracle, I was able to get my finger in one of the holes and slowly on pulled it. It seemed like an eternity, but I finally heard air go in and eventually the ball popped out. He came to, but wasn’t able to walk right away. He perked up while carrying him to the car. Neither of us had any idea if this could cause any lasting effects (it can, by the way) and immediately rushed to the vet.

MORE DETAILS + AFTERMATH
The Chuck-It Whistler ball is the same size as  a standard tennis ball and others sold to dog owners. (I actually used to use tennis balls, but those wear down their teeth very fast. Had I been using a tennis ball, Torch would be dead…) The issue is this ball is too small for most medium and bigger dogs, but most people don’t know that. I certainly didn’t. It’s a widespread belief that tennis balls/balls of similar size are safe for medium and large sized dogs. The fact is, the only safe balls are ones they CANNOT completely fit behind their canine teeth.

You can see what happened to my hand here. (Warning: the pictures are a little bloody, so I didn’t want to surprise anyone with that. But, if you want to see, click the link.) Notice how far up my arm the bruises go. Imagine sticking your hand that far down your flailing dog’s throat. This was one time that I’m thankful for my tiny “5-year-old” hands. Seriously, if my hand were much bigger, it wouldn’t have been able to fit. Jeff couldn’t get his hand in. This was definitely not how I wanted to get my tetanus shot updated. I went to urgent care (since I know all the nurses and mothers of the world  are dying to know) and it healed up in about a week, since the gashes weren’t deep. It healed in about a week. (Just in case it wasn’t clear: Torch did not bite me purposefully. He couldn’t breathe and in the process, was opening and closing his mouth.)

The first few months after the incident, Torch’s neck was incredibly swollen. He couldn’t wear a collar or anything else around his neck. He had a lot of problems turning his neck. He could barely turn it catch a disc. A year later, Torch has recovered. He still can’t wear most collars and bandanas around his neck for a long period of time. But overall, he’s doing fantastic. He has full range of motion now. 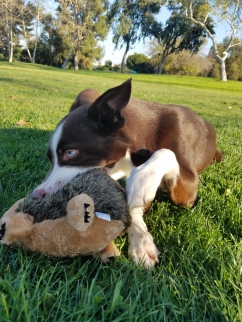 This couldn’t have been done alone and Torch would be gone had I been by myself. It’s especially scary, considering how often I’ve played ball with my dogs at the park alone. This was the most horrifying thing I’ve seen (in person) happen to a dog. Jeff agrees. I can’t fully explain how awful this was to experience, but I will tell you it’s enough to never play with any ball they have potential to swallow whole. I wish I would have known before poor Torch had to endure that…and that’s why I’ve written this. I’m fairly savvy when it comes to dogs. I didn’t even know. How could a new dog owner or less-dog-savvy person know? I didn’t even think it was possible. However, the vet tech at the animal hospital we took Torch to said they get this type of case about 2 times a month. He said if it can fit behind their canines, they can choke it. This should become general dog knowledge. If you feel so compelled, please share.

After sharing Torch’s story on Facebook, there was a flood of responses with stories sharing that a dog they had or knew went through the same thing. Most of those stories didn’t have a happy ending. I am so heartbroken for them. If you have a similar story, I’d appreciate it if you shared in the comments below.

I’ve created a list of our favorite ball alternatives which you can view here.

Our friend, Pennie Mahon, with Barks 5th Avenue in Houston, TX, made a great video about our story with examples of appropriate vs dangerous ball sizes. Check it out here: