When you watch Torch play disc, he’s a bit ferocious. He’s sort of known to be a serial killer of discs, leaving them with broken rims, slashes, and giant pieces torn out. Torch is not particularly known for his love of dogs either… However, other animals are a different story.

For us, urban life in Orange County, CA, has not included much contact with animals that you might see on a farm – chickens, sheep, cows, pigs, etc. Torch’s cowboy breeder refers to him as a “city dog.” Basically, he doesn’t live on a farm and he doesn’t work to earn his keep. He’s kind of spoiled. (Okay, maybe super spoiled.) But as a herding breed, one would expect Torch to have some kind of interest in animals. How cool would be to see Torch, in action, doing what he was bred to do? So, we tried herding…Once. (Obviously, that tells you how it went.) He just stood by my side and looked at me like, “What are we doing here?” Not even his idol, Flash, could convince him to join in. When you look at Torch’s priorities in life, I guess it makes sense. After all, how would sheep ever be able to throw him a Frisbee? Once he got bored of watching that for like 30 seconds, my non-poop eating dog decided that sheep feces was worth a try. Apparently, herding sheep is SO unappealing to him that eating crap is better.

When we go trail running, he shows no interest in the bunnies, squirrels, or lizards. If he sees a bird and it starts flapping away, his first reaction is to run and hide behind me. What else is the city dog to do? My other dogs are much more interested in critters. Whether it’s to herd them or eat them, I’m not exactly sure. Even the Chihuahua mix has more interest in chasing critters than Torch.

Basically, Torch is a total weenie. He’s probably the only one of my dogs that would chill long enough to take pictures with non-canines. So, I started taking pictures of Torch with other animals to be silly. But for some reason, this year, we just kept running into chicken photo opportunities, specifically. Alas, I give you Torch (sort of) posing with his own kind, chickens… 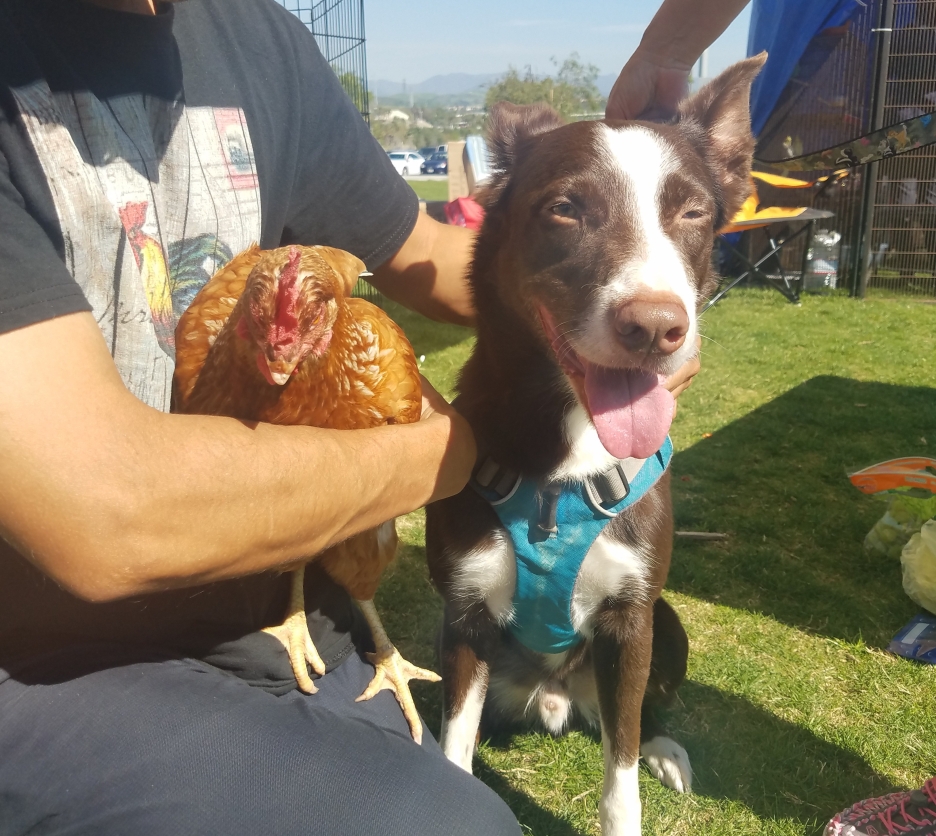 The whole Torch with chickens thing started by accident. We were at the 2017 South County Pet Expo and were a little surprised to come across a chicken rescue. Of course, we donated and took a picture with the chicken. How could we not? It’s more fun to take photos of your dogs than yourself. Of the dogs I had with me, Torch was the only one I trusted not to hurt the little thing. So, he was the obvious choice. I wasn’t totally sure how Torch would react since he’d never met a bird before. I was surprised they even let my dog get this close to their chicken, but maybe the $5 was worth risking little chickadee. While Torch was not thrilled about taking the photo, he totally loved the chicken. He sniffed and his nubby tail wiggled a mile a minute. Yeah, T wanted to play with the chicken. Chicken was not exactly enthused. $5 well spent. 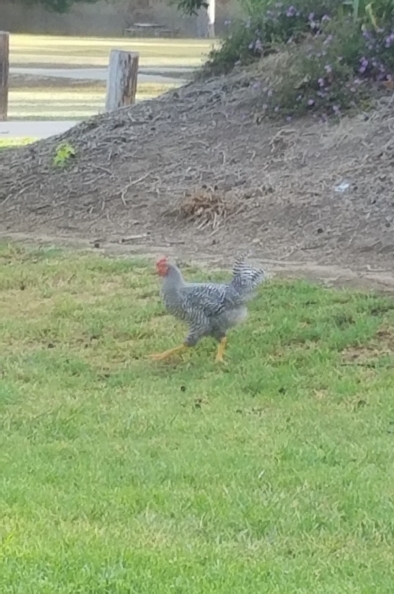 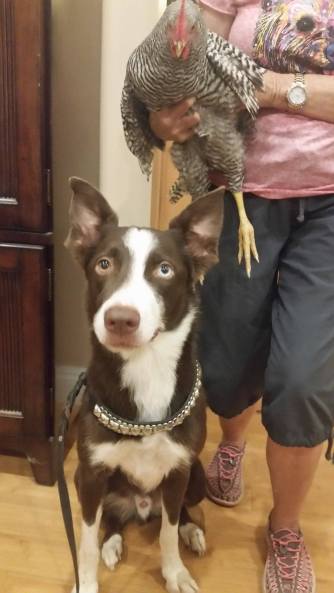 This chicken was running around at the park while I was practicing throwing. (Yes, a stray chicken.) I sent a photo to my mom thinking it was funny and wouldn’t you know it? The president of K9 Spirit Organization dog rescue couldn’t help but rescue the chicken. Here we had this chicken, in my living room. It found a home – not with us, thankfully. I think Torch was disappointed to see her go. Have you ever seen Torch’s eyes open so wide? No, you haven’t. 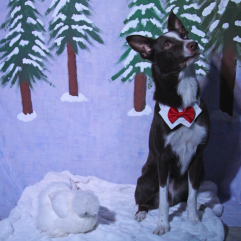 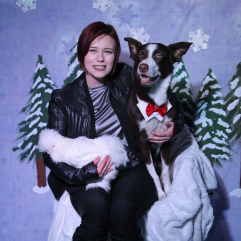 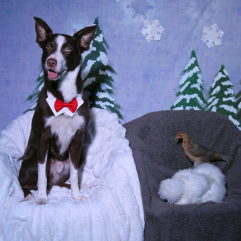 Now these ones are special, silky chickens. They’re like the Chinese Crested Powder Puffs of chickens. I was slightly worried that Torch might think they were squeaky toys or creampuffs, but he was smart enough to know that they were living creatures. He learned that when you try to sniff them, they flap their wings. And it’s super duper scary! Hence, we had to revise the “chicken curls up with Torch” photo and go for the “flapping distance” version. Who’s the real chicken here? (I think it’s Torch.)

Apparently, 2017 actually is the year of the rooster. Maybe this was fitting for this year. We’ll see if Torch gets to visit more chickens or other creatures in the future…

Bonus: Torch and a baby piggy! 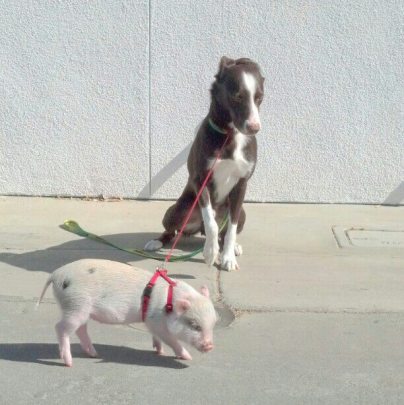 Oh piglet. We met baby Banks at Pet Expo. He sniffed the little piggy and was ready to play with her. That is, until she snorted. Then Torch realized it was actually not a puppy. What is this thing? And suddenly, it was tied to him. Baby pigs don’t know stay. Three year old dogs do know stay and get tested by tying baby animals to them. Sorry, Torch.